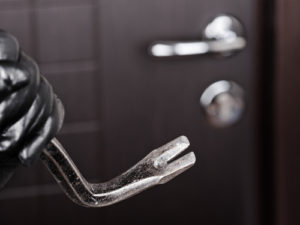 According to Florida Statute, burglary means:

1. Entering a dwelling, a structure, or a conveyance with the intent to commit an offense therein, unless the premises are at the time open to the public or the defendant is licensed or invited to enter; or

2. Notwithstanding a licensed or invited entry, remaining in a dwelling, structure, or conveyance:

a. Surreptitiously, with the intent to commit an offense therein;

b. After permission to remain therein has been withdrawn, with the intent to commit an offense therein; or

What are the penalties for burglary in Florida?

Burglary of an unoccupied structure or conveyance is a 3rd degree felony.

The penalties for burglary may also be enhanced under certain circumstances such as when the burglary is committed within a county that is subject to a state of emergency declared by the Governor and the perpetration of the burglary is facilitated by conditions arising from the emergency.

Can I be charged with burglary for breaking into a car?

Yes.  The term “conveyance” is defined as “any motor vehicle, ship, vessel, railroad car, trailer, aircraft or sleeping car; and to enter a conveyance includes taking apart any portion of the conveyance.”  This means that the simple act of reaching through an open window of a vehicle and touching another individual against their will can technically be charged as burglary with a battery, a 1st degree felony punishable by life in prison.

While there are many different forms of burglary in Florida, there are also several potential defenses.  If you have been accused of burglary in the State of Florida and would like to Contact a Naples Burglary Attorney, please call 239-775-1004.  Consultations are absolutely free and completely confidential.

The Law Offices of Verderamo & Nunez provide legal representation primarily in the fields of criminal law and personal injury law.  While our offices are situated in Naples and Ft. Myers, Florida, we proudly represent clients throughout Collier and Lee Counties and their surrounding areas, including, but not limited to, Naples, Fort Myers, Bonita Springs, Estero, Cape Coral, Golden Gate, Immokalee, Lehigh, and Marco Island. The Law Office of Verderamo & Nunez is located at 2662 Airport Pulling Rd S Naples, FL 34112.  For more information, call (239) 775-1004.